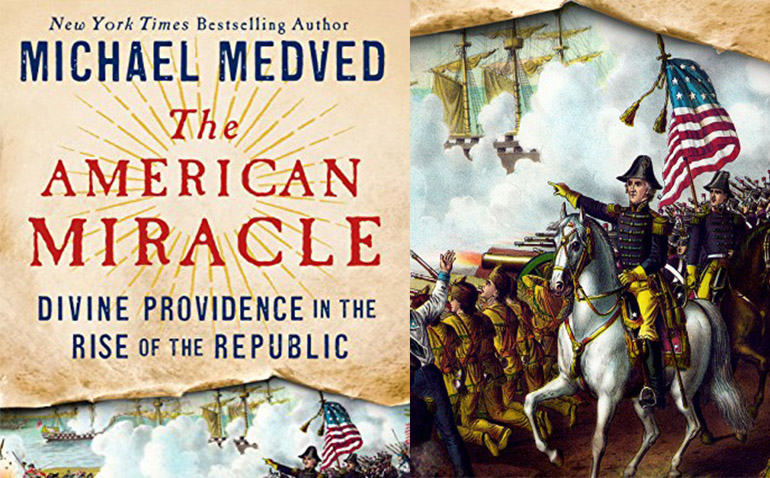 Book Review:  The American Miracle – Divine Providence in the Rise of the Republic

Michael Medved is a long-time talk radio host, movie critic and author of twelve books.  In this latest effort, Medved proves once again that he is a master story teller.

The book’s thesis, as the title suggests, is the omniscient presence of God’s hand in the early centuries of American history.  To make the case, Medved narrates twelve compelling stories stretching across the 240 years from the landing of the Pilgrims to the end of the Civil War.  In addition to famous Presidents, statesmen and Generals, the reader is introduced to a colorful array of characters; who, despite being lesser known, play key roles at what turn out to be critical hinge points in American history.

The first Indians the Pilgrims encountered were Somerset and Squanto.  The Indians greeted them with a salutation in English, “Welcome Englishmen,” followed up with the question, “Do you have beer?”  How it came to pass that Squanto would be versed in English and have an acquired taste for beer is a fascinating back story.  As it turns out, he was kidnapped at age 12 by an English sea captain in 1605.  After enduring 15 years of servitude in London and Spain, Squanto managed to finagle a return to his native soil six months before the Pilgrims arrived in 1620.  Squanto’s cross cultural and linguistic experiences were instrumental in the peaceful settlement by the Pilgrims.

Then there is Nicholas Trist who was a government bureaucrat from the 1820’s to 1840’s.  By 1847, he was the chief clerk to then Secretary of State James Buchanan.  It was a year of war; Mexico versus the U.S.  When the time came to make peace, Buchanan’s presidential aspirations kept him in the capitol and Trist was sent on the 1900-mile journey to make peace.  With telegraph not yet available and a frosty relationship with Army Commander Winfield Scott in addition to the unstable government of Mexico, the task of peacemaking was daunting.

At stake was not only peace, but the future map of the U.S. with Mexico holding title to the California Territory and land that would make up parts of nine future states.  Trist would finalize and sign the treaty on February 2, 1848.  A 17-day journey brought the documents to President Polk and the Senate where it passed by one vote.  Then it was back to Mexico for the final approval of the Mexican Congress.  With communication at horseback speed, none of the politicians at either capitol were aware of a monumental development that would trigger one of America’s great migrations and change forever the fate and fortunes of California – the discovery of gold on January 24, 1848.

These are just two of the incidents that make The American Miracle a treasure trove of vignettes that will inform and inspire.

A common thread through all the stories is adversity.  Not the 21st century adversity of micro-aggressions and offensive words that have universities providing safe spaces for offended students.  The adversity in The American Miracle is of the Old Testament variety – cauldrons of blood, steel, fire and brimstone.  The type of adversity that takes seemingly ordinary flawed men like Abe Lincoln, Andy Jackson, Sam Houston and Davy Crockett and turns them into the giants of their time.  Was there a higher power at work?  Read the book and decide for yourself.