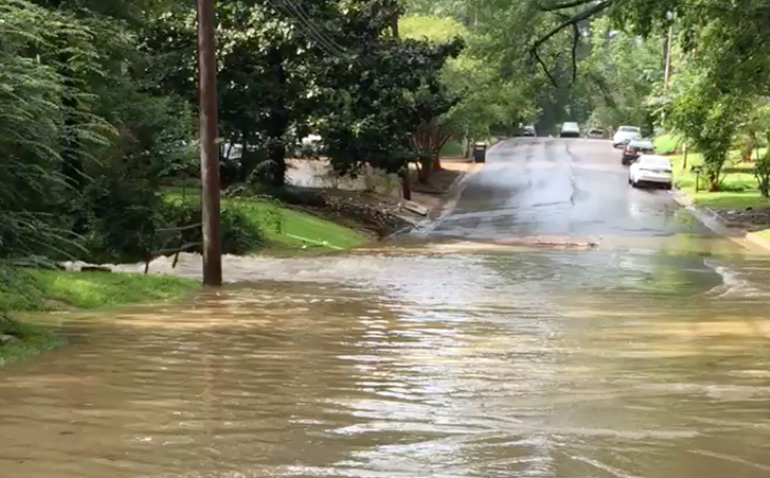 Bigger Pie first commented on the urban flooding issue in November 2017 (see video). It is a serious issue that has frustrated many citizens across Jackson. The Belhaven neighborhood has been especially hard hit by flash flooding by Belhaven Creek in recent years due to the lack of retention ponds to compensate for the buildings and impervious surfaces that have proliferated in upstream areas like UMMC and elsewhere. There has not been an extreme event in the first 5 months of 2018, but the threat still exists.  Read here in the Northside Sun for the full story.  View the USGS hydrograph for Belhaven Creek during the flash flood event in August 2017 that correlates with the video above. 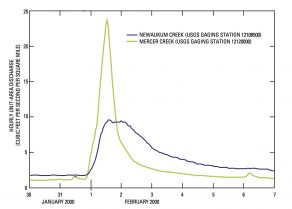 Urbanization can cause havoc with creek and stream drainage.  We should not be surprised – over the past century, American towns and cities have replaced millions of acres of water soaking land with the impermeable surfaces of buildings, roads and parking lots.

The accompanying hydrograph [Courtesy of the U.S. Geological Survey (USGS), a unit of the U.S.Department of the Interior.] illustrates how water-flow can vary between urban and rural creeks.  The volume of water represented by the area under both curves is close to the same, but the urban creek has a huge spike in volume at the gaging station due to high level of impervious surfaces (roads, buildings and parking lots) that accelerate the flow.  Those spikes often result in flash floods that can do severe damage to homes, cars and other property.

The technical challenge for drainage engineers is how to best “cut the top” off the hydrograph.  Experienced engineers will tell you there are four key elements to tackling flash floods caused by urban drainage issues:

These rules are easy to say, but can be very difficult and expensive to implement.

Flooding in urban settings is a complex and tricky issue for regulators, whether it is at the local, county or state level.  Tricky because creeks and streams and their drainage basins often run through multiple jurisdictions.

For more information on this subject, please check out this 2003 article from USGS.