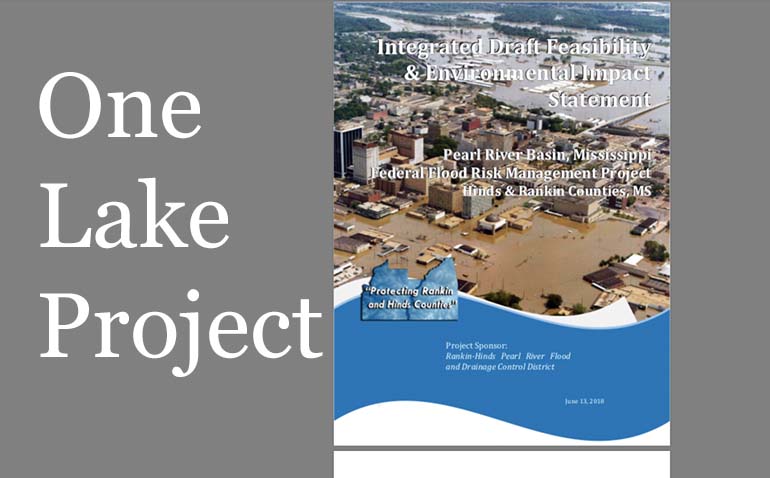 I arrived at the Ag Museum for the recent One Lake meeting about fifteen minutes before kickoff.  There was a long slow-moving line at the door.  No tailgaters.  But people were working the crowd.  They were “one-river-no-lake” advocates with a handout explaining why they oppose One Lake. There are several reasons.  But they boil down to: It’s not perfect.

One Lake started out as Two Lakes in the aftermath of the disastrous Easter Flood of 1979.   It was the idea of legendary oil man John McGowan — a master of oil field hydraulics. His idea was to change the hydraulics of the Pear River to reduce flood risk at Jackson.  It was to open the channel and speed up the flow to shorten the duration and height of floods and to add levees and surge capacity to contain them.  It created a reservoir with miles of shore line suitable for commercial and recreational development. (Think Chattanooga and Nashville.)

It was a great idea.  But it wasn’t perfect either.  Opposition was predictable.  Environmentalist objected to destruction (rearranging) of wetland habitat and threats to endangered species.  Others objected for other reasons.  So, One Lake evolved as a compromise.  But environmentalist still oppose it.

They say the federally protected Gulf sturgeon and the ringed sawback turtle may lose some habitat (possibly ten miles).  That’s less than one per cent of the meander length of the lower Pearl, the Mississippi, the Suwannee, and other rivers where the Gulf sturgeon lives.  Is one percent critical?  Can’t turtles and fish co-exist with One Lake?

Probably better than wolves and sheep can co-exist.  “Wolves Attack Wisconsin With Washington’s Help” according to a recent article in the Wall Street Journal.  Wolves are an endangered species too.  They are also dangerous to sheep and sheepdogs.  They kill them.  But sheep owners face a $50,000 fine and a year in prison if they shoot wolves killing their sheep and guard dogs.  Congress could change this in the 2019 Interior Department appropriations bill and let shepherds protect their sheep.  Seems like a good idea.

Endangered fish and turtles are not dangerous predators like wolves.  But the threat of losing some of their habitat is being used to endanger the One Lake Project.  Seems like a good idea to put the possible loss of some habitat in perspective with the $500 million loss from the 1979 Easter Flood (a billion today).  And let elected officials, concerned citizens, planners and engineers protect Jackson.  It’s still endangered.

But wait, there is opposition to engineers and planners. Organized opposition.  Because their work has cost taxpayers – about $8 million so far.  And because their work will benefit property owners who will pay taxes if they benefit from the project.  And taxes will benefit Jackson and Flowood – and that’s bad?   And because someone makes some money from development.  And that’s bad?  (Check out Nashville and Chattanooga.)  And because costs are not final, and there may be unknown costs. And because plans are not detailed enough.  And so on.

And so on includes downstream effects.  The Pearl River rises in Neshoba County (Faulkner’s fabled Yockanookany is a tributary).  But the Ross Barnett Reservoir Spillway controls the Pearl’s flow to Jackson, and thence to the Gulf over 200 river miles downstream.  Questions include: What if the Pearl runs low or dry?  What if One Lake affects water temperature or quality and the oyster beds near its mouth?  What if flooded waste sites aren’t properly remediated and contaminate flow?  They begin to sound like: What if the sky falls?

Many people wonder: What if the sky opens again and there’s another flood and nothing’s been done?

So, let’s look at the margin for error if they are wrong and the risks and the trade-offs.  What about low water – low flow?  Will One Lake make it worse?  Will there be less flow downstream because of One Lake?  Sometimes maybe, but probably not enough to notice.  The discharge at Ross Barnett determines the flow downstream. Water that flows out of Ross Barnett flows into One Lake and then flows out over a spillway or low head dam to maintain minimum water level.  One Lake has levees to contain high water or floods while they are released downstream.  But at low level, water flowing in essentially flows out at the same rate.

But what about evaporation losses in the One Lake impoundment which is large relative to the flow through it in low water? Theoretically, there may be some loss on hot summer days during low flow.  Engineers estimate less than one percent flow reduction downstream due to One Lake evaporation loss.  Is this enough to affect water quality at the Gulf?  Is it enough to even measure at the Gulf and attribute to One Lake 200 miles upstream?  Probably not with a high degree of confidence.

One Lake opponents at the Ag Museum wanted a mic so everyone would hear their questions.  They were upset they didn’t get one.  But others who wanted to ask their own questions had more time to talk directly with engineers and planners – who stayed to answer all questions.

There will be other forums with other formats for more questions and comments from the opposition.  Let’s hope they are enlightening and constructive.  And not just ugghhhh —muddying the water.