Mississippi’s Kemper Project integrated coal gasification power plant hasn’t generated any power off its primary fuel, but it has generated one thing in bunches: lawsuits. 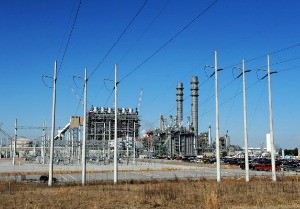 Photo by Mississippi Power
TURBINE POWER: The combined cycle plant is in the foreground, with the heat recovery steam generator smoke stacks looming behind it.

ratepayers by avoiding accountability for “fraud and mismanagement while fleecing the public in the interest of profits” in building the “goliath” Kemper Project power plant.

“We are aware of the suit filed and believe it’s without merit and baseless,” said Mississippi Power spokesman Jeff Shepard. “It’s unfortunate that others are attempting to discredit Mississippi Power with no legitimate grounds. The company will defend itself in this lawsuit.”

The cost of the plant has ballooned to more than $6.644 billion, from an original estimate of $1.8 billion in 2006. Designed to turn lignite coal into a natural gas-like substance called synthesis gas, it also is years behind schedule.  It has been running on natural gas since August 2014 and is scheduled to be operational generating power on synthesis gas, according to the company, in the third quarter of this year.

There have been several rate increases approved by the PSC to help fund the plant’s construction, including an 18 percent hike in 2013 that was later thrown out by the Mississippi Supreme Court, and an 18 percent “emergency” rate increase to replace the disallowed one that was cut to 15 percent last year, to help pay for the plant’s turbines, which are generating power on natural gas.

This is the third lawsuit filed against Mississippi Power concerning the Kemper Project, and it takes a different legal avenue than the others.

The case made it all the way to the Mississippi Supreme Court, which struck down a Mississippi Power rate increase enacted in 2013 to cover the construction of Kemper Project and forced the company to issue refunds to customers. In its opinion, the court ruled the company could not use construction work-in-progress money – $125 million in 2013 and $156 million earned from a 15 percent rate increase in 2013 and a 3 percent increase in 2014 – because the Mississippi Public Service Commission hadn’t ruled on the prudency of the plant’s cost.