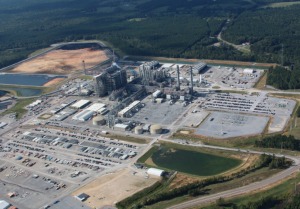 An automobile and the Kemper syngas production plant have a commonality, each have thousands of parts. One or two parts can fail in a car without disrupting a trip from Jackson to Brandon, but most must work together before driving from Mississippi to El Paso, TX. However, the engine (the main

part) must work to get to either Brandon or El Paso.

The gasifier reactors are the engine of Kemper as promised by Southern Co. (SO) and Mississippi Power Co. (MPC). They turn the carbon in lignite into a gas which becomes syngas, the proposed cheap fuel for generating cheap electric power at Kemper. Alas, the engines still do not work almost three years after the Kemper turbines began producing electricity from natural gas.

Southern promised that their new technology, called TRIG, had solved the long-standing problem of gasifying coal or lignite economically. The key to TRIG was its ability to gasify lignite at a lower temperature (by a few hundred degrees F) than older processes, which would correct the older processes’ issue of slag formation and erosion of the special tiles lining the reactors. Even though a large part of Kemper is complex pieces of equipment to modify and cleanup the gas from the gasifiers, ash is turning into slag chunks. It just ain’t going to work! At this point, even if it did work, it wouldn’t be cheap syngas or power.

Bigger Pie Forum has long felt the gasifier units (the engine) would never work reliably for long periods. The small temperature range within which the gasifier units must operate cannot be controlled uniformly across the large reactors. Either hot or cold spots will develop within the very large volumes of moving solid, gas mixture. Hot spots will fuse ash into slag, plugging the system, shutting down the units for long periods of time. Cold spots will result in either lower syngas production or low energy efficiency across the system. Both hot and cold spots result in terrible economics, assuming the reactors run at all.

Below is a distillation of problems relating ONLY to the gasifier units taken from the Independent Monitor Report to the PSC posted March 24, 2017. Many other problems with other parts of the syngas plant were listed, but we are focusing only on the engine (gasifiers). However, the other problems remain – with the transmission, the steering, the tires, and of course the brakes don’t work.

Oh, and the radiator was installed backwards.

We’ll zero in on the gasification reactors in more detail as the crucial June 3, 2017 date approaches. MPC is mandated to make a rate filing by that date. Can MPC satisfy the Mississippi Public Utilities Staff (MPUS) and PSC that syngas assets should be considered for inclusion in rates by that date? If MPC cannot operate the gasifiers by that date and must make a rate filing again for the electric power generating turbines burning natural gas, then the Kemper rate process is on a new course. Keep in mind, MPC already had to file a rate case for the turbines only burning natural gas back in July 2015. They have struggled two more years now and still can’t crank the engine. The battery is about to die.