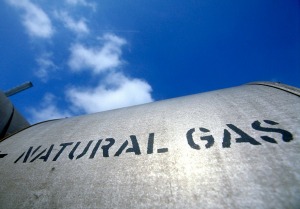 The promised value of Kemper lignite gasification to customers was false in 2010, but the PSC chose to ignore the Emperor (Southern) wore no clothes.  It is time for the PSC to acknowledge the naked facts and Rule the lignite portions of Kemper Not Useful.  Based on MPC’s own cost data from 2010, Kemper burning lignite is shown below to be economically worse over 40 years than Kemper turbines on natural gas, even if natural gas prices escalated to over $70/MMBTU during the last 30 years of plant operations.

In an earlier article, “Kemper Gasifier: Slow Agony, Sure Death”, the gasifier plant is described as a cancer deadly to Mississippi economic growth for decades.  In 2010, the Public Service Commission (PSC) and the Mississippi Public Utilities Staff (MPUS) diagnosed Kemper as benign, even helpful.  There was no close examination of the technology, of how much engineering was completed, of the risks and of the outrageously high natural gas price projections Southern used to justify lignite gasification.  Were they oncologists, the PSC and the MPUS would now be in court for wrongful death.

In 2010, Mississippi Power Company (MPC) filed Chart 1 as they sought PSC approval to construct the Kemper clean lignite plant.  The chart shows future natural gas prices that would result in the Kemper project being breakeven for customers versus building a new natural gas fired combined cycle plant (NGCC).  Southern assumed and the PSC accepted the NGCC natural gas fuel would cost $10-20/MMBTU.   The red line added to Chart 1 shows Southern’s natural gas price projections used to justify the lignite project.   Their natural gas price projections appear fudged to make the cost of power from a stand-alone NGCC appear more expensive than from Kemper burning lignite.  It was both illusion and delusion.

Chart 1 is based on the construction, operating and maintenance (O&M) and other cost estimates at the end of 2009.  Financing costs, a major item, was excluded.  In short, projected costs for Kemper burning lignite were a fraction of current reality.  But the sleight-of-hand gets even worse.  Costs for the NGCC used for the comparison in Chart 1 were increased by monies already spent for Kemper at that time.  It was an extremely biased comparison even in 2010 and given current reality, laughable.  The PSC saw nothing unusual and did not even take the cancer patient’s temperature.

I ask the PSC to make public an updated version of Chart 1 based on current MPC estimated costs operating Kemper on syngas compared to the Kemper NGCC as a stand-alone plant burning natural gas.  I ask they use the latest U.S. Energy Information Agency (EIA) projected natural gas prices through 2035.  From 2036 through end of the plant life, calculate the cost curve for natural gas required to make Kemper on syngas breakeven on a net present value basis with the stand-alone Kemper NGCC. 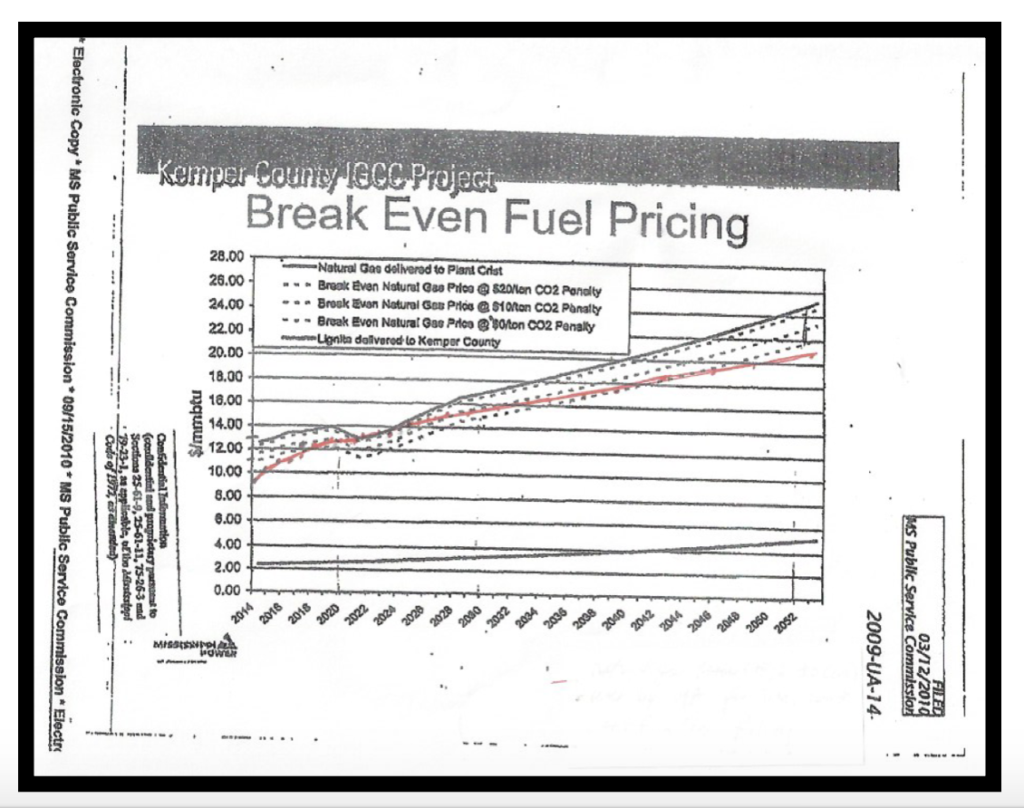 For Chart 1, MPC calculated the cost of natural gas each year to equate total costs for power from Kemper burning lignite (IGCC), versus a new natural gas plant (NGCC) burdened with unusual extra costs.  We can calculate the effect of changes in natural gas pricing on the economics (NPV) of Kemper at 2010 costs vs an NGCC.   Simply multiply the difference in current natural gas price projections above or below MPC’s breakeven prices by the volume of gas consumed each year and the net present value (NPV) discount factor for the year.

Using MPC’s 2010 natural gas breakeven cost curve for $0/ton CO2 penalty and current EIA projected prices for natural gas delivered to electric power plants, we can calculate how truly terrible the 2010 economics of Kemper on lignite compared to the NGCC.  This is not a trivial exercise as the options for MPC customers remain electric power costs based on either Kemper burning natural gas (stand-alone NGCC) or as the proposed lignite gasification plant (IGCC).  The results are terrible for lignite, but keep in mind costs to construct, operate and maintain the Kemper burning lignite are from 2009-2010. 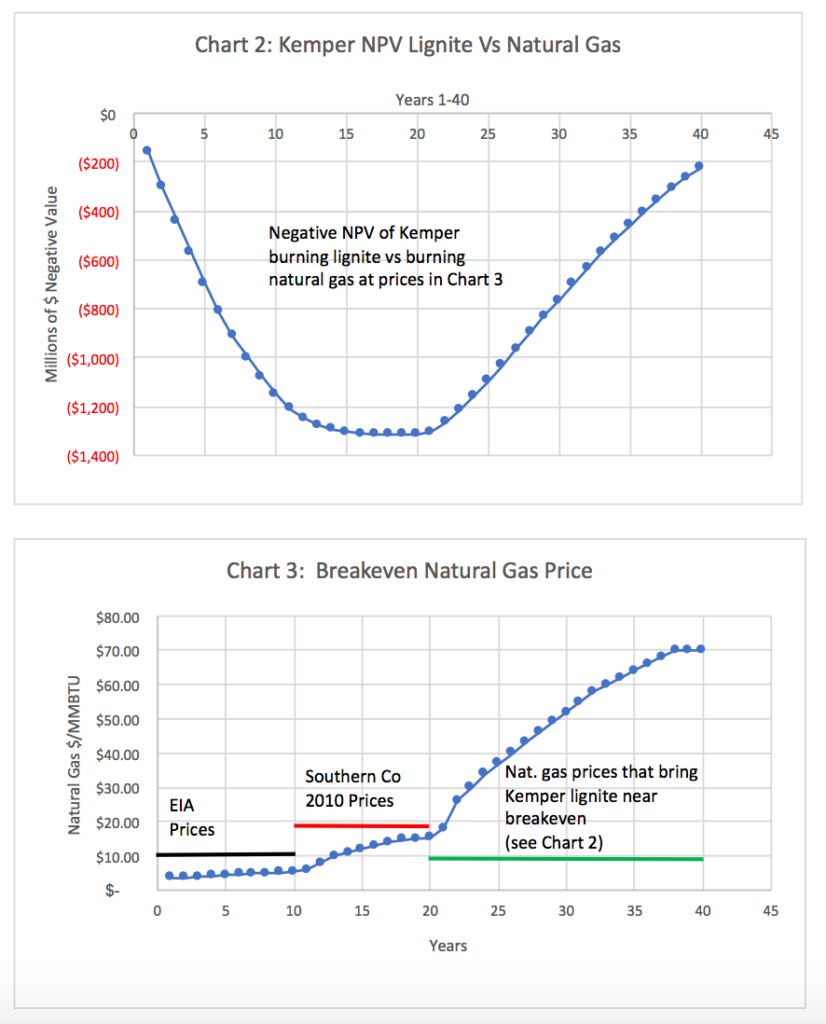 Chart 2:  Even with natural gas prices increasing to $70/MMBTU as shown in Chart 3, Kemper burning lignite has a lifetime ($200) million negative net present value (NPV) cost compared to Kemper turbines burning natural gas.  Costs for Kemper burning lignite are per MPC’s 03/12/2010 filing 2009-UA-14 (Chart 1).  That means the power costs from gasification in Chart 2 do not reflect the additional billions of dollars of construction, operation and maintenance, and construction finance costs since early 2010.  Costs for the current version of Kemper burning lignite would require much, much higher natural gas prices for NPV breakeven than are shown in Chart 3.   A chart showing current cost comparisons of power from Kemper on lignite vs the Kemper turbines as a stand-alone burning natural gas is what we request the PSC to publish.

Chart 3:  The first 10-year natural gas prices in Chart 3 (black bar) are the Energy Information Agency’s (EIA) 2016 projections for costs delivered to electric utilities.   Gas prices for years 11-20 (red bar) reflect Southern’s natural gas price projections given to the PSC in 2010.  Years 21-40 (green bar) gas prices are increased to bring the Kemper lignite NPV to about negative ($200) million by year 40.  Prices in the chart illustrate how unrealistic Southern’s promise of Kemper lignite ever being economical compared to Kemper turbines burning natural gas.  We used only 10 years of EIA’s projected natural gas prices.  Using EIA’s 25 year projected natural gas prices would create NPV values for Kemper on lignite of negative billions of dollars even at $70/MMBTU gas.  The Kemper plant on lignite cannot generate enough discounted savings for customers in the latter years of operation to offset early year savings.  The risk of natural gas price volatility or the value of the dual fuel option frequently raised by Southern Co. are red herrings.

Based on MPC’s own cost data from 2010, Kemper burning lignite would be economically worse over 40 years even if natural gas prices escalated to over $70/MMBTU during the last 30 years as in Chart 3.  These results are a consequence of the very large savings by burning natural gas for the next 10-20 years or longer.

The lignite processing investments should be declared Not Useful.  MPC customers should pay only for the Kemper NGCC portion.  We acknowledge PSC legal constraints within the normal rate-making process.  We have noted in an earlier article that the PSC has the authority to adopt a tough stance on Used and Useful and on rate-making during the several years before Kemper burning lignite can demonstrate Useful.  If all Kemper rate increases related to lignite processing during that long period are refundable, unless Kemper is Useful at the end, odds are high MPC will wish to negotiate a final settlement earlier, outside the normal rate making process.  The normal regulatory process leads to Slow Agony for everyone involved and sure Death for southeastern Mississippi’s economic development.