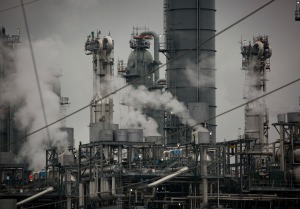 In Atlanta, on June 28, 2017, Southern Company and Mississippi Power Co. announced immediate suspension of start-up and operations activities involving the lignite gasification portion of the Kemper County energy facility.  A copy of the entire release appears below.

The release is Southern Co. waving a white flag, the prelude to surrender.  The PSC’s June 21, 2017 guidelines for a July 6, 2017 formal Order set the stage.  Southern Co. got the unconditional surrender message.

MPC had one narrow path out of the box in which the PSC put them into: get COD (Commercial Operations Date) for the gasifier portion of Kemper before the end of September 2017.   Suspension of gasifier operations activities removes their last feeble hope to alter the outcome.  A formal COD designation would have made a quick resolution almost impossible and would have cost MPC customers more.

While criteria for determining COD were given broadly in 2012, details were left to the Mississippi Public Utilities Staff (MPUS) and the PSC to determine once the plant began to operate.  COD requires the entire plant to achieve a range of performance goals.  This Southern Co. Press Release signals that MPUS’s performance goals have been fleshed out and cannot be achieved.

Reports by the Independent Monitor for MPUS have long hinted that the Kemper TRIG technology had a fundamental flaw; it didn’t work.  Word has recently leaked out from employees confirming this.

This action is being taken to preserve the safety and health of the workforce and safety of the facility, while still retaining the necessary workforce to operate the combined cycle power plant.

“We are committed to ensuring the ongoing focus and safety of employees while we consider the future of the project, including any possible actions that may be taken by the Commission,” said Southern Company Chairman, President and CEO Thomas A. Fanning. “We believe this decision is in the best interests of our employees, customers, investors and all other stakeholders.”

Southern Company and Mississippi Power believe this is the appropriate step to manage costs given the economics of the project and the Commission’s intent to establish a settlement docket to address Kemper-related matters including the future operation of the gasifier portion of the project.

“I am extremely proud of the thousands of our employees and the contractors who have helped construct Kemper,” said Mississippi Power Chairman, President and CEO Anthony L. Wilson. “The commitment of these individuals to their jobs, the challenges they have overcome and their dedication to our customers has been outstanding. The customer is at the center of everything that we do. We appreciate the communities we are privileged to serve and the local leaders who continue to support our company and our employees throughout this process.”

The company will fully participate in the proposed settlement docket to be established by the Commission on July 6. The company will make any future announcements as to the status of the project based on the outcome of that process or future Commission action.

Southern Company (NYSE:  SO) is America’s premier energy company, with 46,000 megawatts of generating capacity and 1,500 billion cubic feet of combined natural gas consumption and throughput volume serving 9 million electric and gas utility customers through its subsidiaries. The company provides clean, safe, reliable and affordable energy through electric utilities in four states, natural gas distribution utilities in seven states, a competitive generation company serving wholesale customers across America and a nationally recognized provider of customized energy solutions, as well as fiber optics and wireless communications. Southern Company brands are known for excellent customer service, high reliability and affordable prices that are below the national average. Through an industry-leading commitment to innovation, Southern Company and its subsidiaries are inventing America’s energy future by developing the full portfolio of energy resources, including carbon-free nuclear, 21st century coal, natural gas, renewables and energy efficiency, and creating new products and services for the benefit of customers. Southern Company has been named by the U.S. Department of Defense and G.I. Jobs magazine as a top military employer, recognized among the Top 50 Companies for Diversity by DiversityInc, listed by Black Enterprise magazine as one of the 40 Best Companies for Diversity and designated a Top Employer for Hispanics by Hispanic Network. The company has earned a National Award of Nuclear Science and History from the National Atomic Museum Foundation for its leadership and commitment to nuclear development and is continually ranked among the top utilities in Fortune’s annual World‘s Most Admired Electric and Gas Utility rankings. Visit our website at www.southerncompany.com.

Mississippi Power, a subsidiary of Southern Company (NYSE:  SO), produces safe, reliable and environmentally responsible energy for nearly 187,000 customers in 23 southeast Mississippi counties. Mississippi Power ranked first in the Southeastern Electric Exchange’s 2016 Safety Performance Reports and is consistently recognized as an industry leader in reliability, customer service and safety. Visit our websites at www.mississippipower.com and www.mississippipowernews.com, like us on Facebook, and follow us on Twitter, LinkedIn, Google+ and YouTube.

Certain information contained in this communication is forward-looking information based on current expectations and plans that involve risks and uncertainties. Forward-looking information includes, among other things, statements concerning the outcome of regulatory discussions and proceedings regarding the Kemper integrated coal gasification combined cycle project (Kemper IGCC). Southern Company and Mississippi Power caution that there are certain factors that could cause actual results to differ materially from the forward-looking information that has been provided. The reader is cautioned not to put undue reliance on this forward-looking information, which is not a guarantee of future performance and is subject to a number of uncertainties and other factors, many of which are outside the control of Southern Company and Mississippi Power; accordingly, there can be no assurance that such suggested results will be realized. The following factors, in addition to those discussed in Southern Company’s and Mississippi Power’s Annual Reports on Form 10-K for the year ended December 31, 2016 and subsequent securities filings, could cause actual results to differ materially from management expectations as suggested by such forward-looking information: changes in tax and other laws and regulations to which Mississippi Power is subject, including potential tax reform legislation, as well as changes in application of existing laws and regulations; the ability to control costs and avoid cost overruns during the development, construction and operation of facilities, which include the development and construction of generating facilities with designs that have not been finalized or previously constructed, including changes in labor costs and productivity, adverse weather conditions, shortages and inconsistent quality of equipment, materials, and labor, sustaining nitrogen supply, continued issues with ash removal systems or syngas coolers, contractor or supplier delay, non-performance under operating or other agreements, operational readiness, including specialized operator training and required site safety programs, unforeseen engineering or design problems, start-up activities (including major equipment failure and system integration), and/or operational performance (including additional costs to satisfy any operational parameters ultimately adopted by the Mississippi Public Service Commission); the ability to construct facilities in accordance with the requirements of permits and licenses, to satisfy any environmental performance standards and the requirements of incentives, and to integrate facilities into the Southern Company system upon completion of construction; advances in technology; actions related to cost recovery for the Kemper IGCC, including the ultimate impact of the 2015 decision of the Mississippi Supreme Court, the Kemper IGCC settlement docket and related legal or regulatory proceedings, Mississippi Public Service Commission review of the prudence of Kemper IGCC costs and approval of further permanent rate recovery plans, actions relating to proposed securitization, satisfaction of requirements to utilize grants, and the ultimate impact of the termination of the proposed sale of an interest in the Kemper IGCC to South Mississippi Electric Power Association (now known as Cooperative Energy); and the ability of counterparties of Mississippi Power to make payments as and when due and to perform as required. Southern Company and Mississippi Power expressly disclaim any obligation to update any forward-looking information.