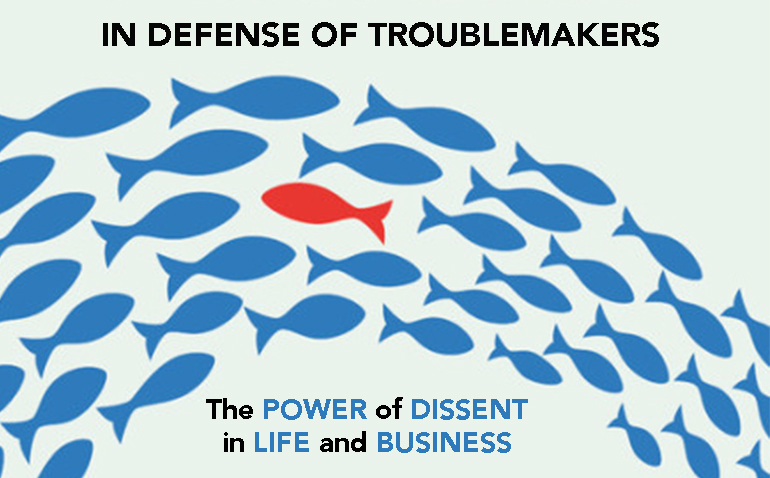 If you have watched the HBO mini-series CHERNOBYL, you’ve seen by way of docu-drama an extreme example of the catastrophic consequences of groupthink and suppression of any dissent.  The Chernobyl accident in 1986 killed hundreds from radiation exposure and came close to shutting down parts of the Ukraine, Russia and Eastern Europe to human activity for many centuries to come.  What is clear as the mini-series lays out in heart-wrenching detail was the unwillingness of the Soviet Union’s government bureaucracy to accept any criticism of its nuclear power industry.  The immediate effect was a delayed and bungled response to a life and death emergency.  But make no mistake, groupthink and suppression of different opinions is not limited to totalitarian dictatorships.  Any organization – big, small, public, private or even a school board can fall prey to groupthink.  When that happens, narrow thinking, poor decision making and less effective organizations are usually the result.

In her 2018 book, In Defense of Troublemakers – The Power of Dissent in Life and Business, Dr. Charlan Nemeth makes a powerful case for the value add of genuine dissent and organizations’ willingness to embrace it.  Dr. Nemeth is a Professor of Social Psychology at Cal Berkley and she brings years of research and keen insight to this subject.  Her work on the tension between consensus and dissent and its impact on critical thinking and decision making began with an assignment to study the requirement of unanimity in juries.  Important lessons from that in-depth research are captured in this jargon-lite easy to read book.  Here are some key takeaways.

A desire for harmony and consensus can be detrimental to open and spirited debate.

The peril of consensus is that it stimulates thinking in ways that narrow the range of options.  This lessens the quality of decision-making.

Consensus narrows thinking to the perspective of the majority opinion limiting options and alternative solutions.

Dissent is a catalyst to more divergent and creative thinking.  To quote the author, “Consensus narrows, while dissent opens the mind.”

The consensus view can preempt a thorough process of good decision making.

Dissent is not as easy as it may look.  Bucking the consensus can be professionally risky as it may threaten the reputation of the organization or people higher up in the chain of command.

Genuine dissenters are not angry arm-waving flame throwers, but rather people with strong convictions and a willingness to confront the established consensus with their views.  It is a sincere dissent intended to influence the decision-making process.

Dissent is more than just appointing someone to the task of being the Devils’ advocate.  The author doubts a designated dissenter will have the same impact on the rest of the group that a sincere dissenter would.

Voices of dissent have a rich history of shaping the world we live in.  Three good examples are Galileo, Martin Luther King Jr. and Aleksandr Solzhenitsyn.  They paid a high, if not the ultimate price for their stands, but in the end their voices left indelible marks on the world.

This is a timely topic.  In the U.S., many college campuses have become bastions of groupthink hostile to differing worldviews with some even offering safe spaces for students who feel threatened when confronted by opinions counter to their own.  Meanwhile, on the other side of the planet millions of Hong Kong ‘troublemakers’ have taken to the streets in protest over ever more close-minded intolerance from Beijing.

Anyone involved in public or private governance would do well to read this book.